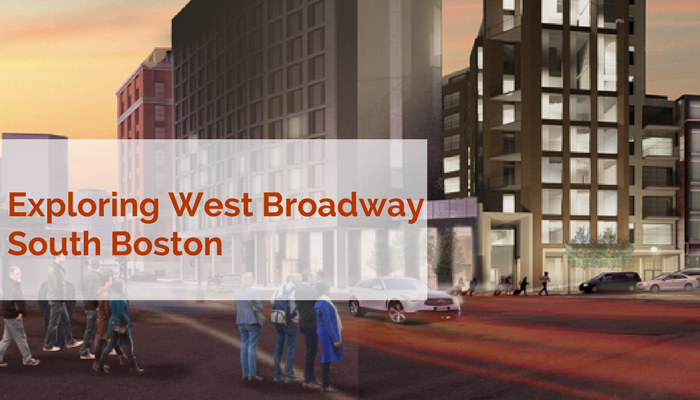 Like all big cities, Boston has its eclectic neighborhoods and pockets of people that really speak to the diversity and culture of the community. South Boston is no different. This urban neighborhood has a strong sense of history and tradition. What was once the base for George Washington's army to get the British out of Boston in 1776 turned into a working-class neighborhood at the height of the industrial revolution. Today, it seems to have found its place amidst the hustle and bustle of the city proper as a highly sought-after residential neighborhood, acting as a gathering space for working artists. It's home to about 35,000, offering many singles, couples and families an urban retreat.

A Bit of Background

West Broadway in particular is the place to be for young up and comers, established professionals, students and families. Its close proximity to T stations, beautiful views of the famed Boston Harbor and eclectic offerings of art galleries, museums, boutique shops and eateries make West Broadway a destination for many. Southie happens to be one of the oldest neighborhoods in the country, home to Dorchester Heights. It's got a booming real estate market that keeps expanding with the addition of more and more condos such as 150 and 170 West Broadway. And as the cornerstone of the annual St. Patrick's Day Parade, an Irish-American celebration of culture that can't be missed, West Broadway and its surrounding neighborhoods bring a history, charm and culture to the area that makes up the fabric of the city.

From Fort Independence Park to Savin Hill Park, the green spaces are what make up much of the beauty of the West Broadway area. There are 13 schools in South Boston, representing a fairly even mix of public and private. Their parents and the rest of the workforce seem to be keeping pretty busy. In fact, the unemployment rate in South Boston is 16 percent lower than the national average, with the per capita income being 59 percent higher than the national average. West Broadway is also host to Broadway Station, a vital transportation hub which consists of the Red Line subway and three MBTA buses with multiple downtown destinations.

Those are all great statistics but what about the things people REALLY care about? Food! Living on West Broadway is a culinary treat in itself, peppered with award-winning eateries, cafes, wine rooms, pizza joints and more. Enjoy a wine tasting at Social Wines at 52 W. Broadway, grab a croissant and a Guglielmo Coffee at Broadway's Pastry and Coffee, eat a slice of cheese at Pizzeria 260, have a business lunch at Stephi’s in Southie, or fill up on some tacos, oysters, and tequila at Loco Taqueria and Oyster Bar.

If you feel the need to work off all that food or you're looking to incorporate a healthy fitness regimen into your daily routine, you won't be at a loss. There's Simply Barre at 118 W Broadway where you can build up your core strength and stamina thanks to a combination of ballet-inspired exercises for a total body workout. Or, get centered at South Boston Yoga, located at 36 W Broadway.

Want to get in on this beautiful, accessible, and modern neighborhood? Check out 170 W. Broadway, consisting of 33 luxury condos and featuring deeded garage parking spaces, high-end kitchens with quartz counter tops, and stainless steel appliances. Or perhaps you're more suited for 150 West Broadway, with 30 luxury condos, 33 on-site parking spaces, an elevator and common terrace. Call Elevated Realty at 617-701-6300 or email info@elevatedboston.com for more information on our luxury buildings in South Boston.