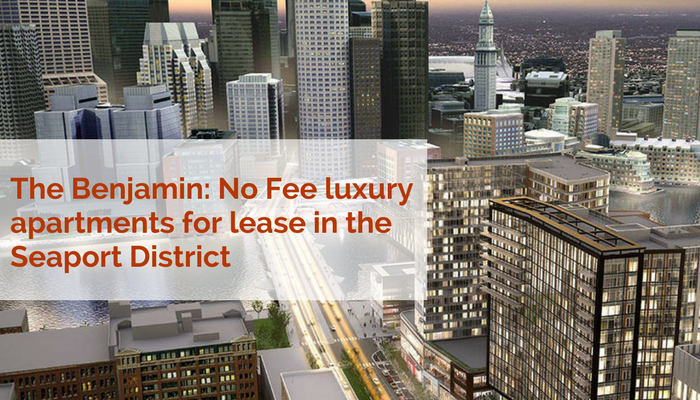 Slated for completion this summer, The Benjamin is desired for its no-fee luxury apartments for lease starting at $2,800 a month. Located in the highly sought after Seaport District, the Benjamin is yet another luxury apartment building that's turning heads in this area of the city. Constructed as part of the Seaport Square development at 25 Northern Avenue, this property will feature:

Although construction will wrap up near the end of June, leasing, and move-ins have already begun. This 22-story building will be a mixed-use building with rental prices between $2,800 and $10,000. Choose from:

Dubbed a hotbed of living space and entertainment, the Seaport District is quickly taking over as Boston's most desired neighborhood for the luxury apartment market. Once a no-man's-land of abandoned warehouses and parking lots in the mid-1900s, this beautiful waterfront area has been completely transformed into a prime spot for real estate growth, says Boston Magazine. It seems there are always construction trucks and cranes erecting yet another office building or luxury apartment/condo building to complement some of the area's best restaurants, trendy bars and boutiques.

Today's professionals want convenience as well as luxury. They don't want large homes out in the suburbs; rather, they want to live where they work, eat, and play. For many, The Benjamin puts them in touch with the lifestyle they want to lead. Nestled next to Boston’s beautiful waterfront, it's close to their offices in the Financial District as well as all major hubs of transportation. With at least nine other residential buildings planned, under construction or recently completed, there's no doubt the Seaport District is one of Boston's hottest neighborhoods. From young college students and families just starting out to established professionals who know exactly what they want, The Benjamin represents a no-brainer: luxury living close to work and play.

With killer views, easy access to the major highways and T stations, close proximity to seaport businesses, and a quick ride into the heart of Boston, the Seaport District is shaping up to be the most highly sought after place to live in the city.

The Benjamin is now leasing for the summer, with a no-fee offering for a limited time. Act now and contact Elevated Realty today at info@ElevatedBoston.com or call 617-701-6300 to schedule an appointment to view the units.